The fifth World Meeting of the Families in Valencia, Spain: a pilgrim’s perspective. 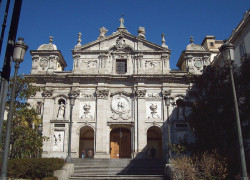 The 5th World Meeting of the Families took place in Valencia, Spain last week. My newly wed son and his wife attended the conclusion of the gathering as a recently created family, one with much potential for growth! I went with them as mother, mother-in-law, and prospective grandmother. We were just three of the pilgrims in a massive gathering of more than 1 and half million.

When you have gone to an event of any sort, to a gathering, or just out for a change of pace, Spaniards will always ask you: “¿te has divertido?” which could be translated for “did you enjoy yourself”, or did you have fun?” And as you would expect, I have been asked the question already more than once. I had to give some thought to my response so it wouldn’t sound blunt. Well, to be truthful, no, I didn’t have fun. It was a honest-to-goodness pilgrim’s experience: it was hard! But then, there was a positive, yet developing side to it…

We had left Madrid for Valencia on a bus at eight o’clock on Saturday morning—needless to say our day had begun much earlier than that. The weather forecast for the weekend had called for a raise in temperatures, and, as it is normal in most of Spain this time of the year, also for totally clear skies. That meant lots of sunshine and temperatures above 35 degrees Celsius or more then 90 Fahrenheit. The weather didn’t prove the forecasters wrong, as the sun in all its force and scorching heat were with us all of the way.

Fundación Nuevo Entorno had made all the arrangements for our pilgrimage. Two busses were headed for Valencia with close to 100 people, mature adults, young adults, teenagers, and children. On our way to Valencia, we were to stop for lunch in the town of Turís about 35 kilometers away from our final destination. The families of the town’s parish had volunteered to open their homes to us. They fed us lunch and provided beds for the night for those who did not want to sleep in Valencia on the ground, in the area where the pilgrims would gather for the conclusion of the Meeting, Saturday night’s vigil and Sunday’s morning closing Mass, the two events to be presided by His Holiness Pope Benedict XVI.

In the hospitable town of Turis in the province of Valencia, we experience the reality of the family that is the Church. The families who welcomed us were in fact members of our extended spiritual families, and they lived up to the expectation. They fed us well and made us feel at home and among friends. We ate and chatted for nearly 2 hours as if we had always known each other. It was a great first experience in our pilgrimage, and others would follow.

After lunch many of us said goodbye to the newly discovered members of our spiritual family and got back on the bus. Soon we arrived in Valencia, which appeared jubilant, as it had ready itself to receive the Pope. Flags of all sorts were hanging from balconies and windows. Women, children, and men were dressed in their buoyant regional costumes. Yellow and white, the pilgrims’ colors, sparkled all over the busy streets. Hundreds, may be thousands of people were busy, ardently moving about as if on a mission. And there we were! Drop off in the middle of the action, astounded, trying to find our way.

We had walked for nearly one hour, or so it appeared. The backpacks seemed heavier than when we started, the sun hotter, and the crowds thicker. There were sprinklers set by the city for the pilgrims to be refreshed, but we passed by them all, reluctant to struggle with the crowds drawn to the fountains. We finally found our assigned area, but what a disappointment! I had agreed to sleep outdoors when I pictured myself as if camping by the banks of the river, wrapped in my sleeping bag, placidly resting on the cooling grass.

The painful reality was so different. We set camp first on a dusty path where there was a bit of shade, our sleeping bags neatly arranged on a bed of stones. We had few other choices. There was a hint of breeze coming from the faraway sea, thus the sandy, stony ground was more appealing than the hot pavement of the adjacent blocked off highway. That was our only other option. After the sun was down and the pavement cooled of, we moved ourselves on to the pavement and away from the dust. Tight camaraderie developed among the 8 or so grown adults that made up our group as we resolved to adapt to of our circumstances, found the best in them, and laughed about their ludicrousness.

There were large screens and speakers where we could watch and hear the scheduled activities for Saturday night’s vigil rally. Too many people had already claimed the ground around the screens, and the only option left to our group was to stand. After standing for a short while, the group finally decided to simply listen to the testimonies and the music, as we earnestly waited to hear the Pope’s message.

We heard encouraging testimonies in many languages from husbands and wives, mothers and fathers of many nations. The declaration of those witnesses confirmed to us the truth that the Church has not ceased to proclaim, that in accordance with God’s plans, marriage and the family are irreplaceable and permit no other alternatives. The family is an indispensable foundation for society. As a future grandmother, the Holy Father’s words spoke to my heart: “The family includes not only parents and children, but also grandparents and ancestors. The family is a community of generations and the guarantee of a patrimony of traditions.”

The family’s rally ended on Sunday morning with a closing mass. After the mass, we saw with excitement the Holy Father leaving the rally’s grounds and going by our spot on the popemobile. The crowds cheered and clapped. They chanted words of support and affection as they enthusiastically waived their flags and hands. He responded with a joyful smile as he waived from inside his vehicle. He was noticeably touched by the affection displayed in the people’s cheers, giving in exchange his love back to the people. As I observed the exchange between the Pope and the people, I could perceive with appreciation the genuineness of their interactions.

The 5th World Meeting of the Families in Valencia, Spain ended and so did our pilgrimage. But the pilgrimage of our life continues with all its joys, flaws, and disappointments. We have learned to recognize the value of the seemly imperfect situations and draw from them whatever is good, positive, and beneficial. Because we have experienced our extended spiritual family, we will forever treasure in our heart the community of the Church, which is the family of God.